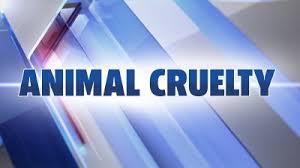 Two Sallisaw residents are facing cruelty to animals charges, according to a police report.

Tori Edwards, 22, was arrested Dec. 4 after an employee of the Sequoyah County Jail requested a welfare check of four horses on his property.

The jail officer said the horses belonged to Edwards and that he had given her permission in early spring to keep her horses on his property for free with the understanding that she would be responsible for caring for them.

The jailer requested the welfare check because the horses appeared to be malnourished and did not have food or water many times. The jail officer said he had only seen Edwards bring feed three to four times and only three round bales of hay had been provided for the animals.

The jail officer said the horses kept getting out of their enclosure in their search for food and he noted that the animals had lost a large amount of weight since they had been on his property.

Deputies at the scene discovered two miniature horses that had been placed in a small pen with a bale of hay and no water. The jail employee said he had watered the little horses for two days because Edwards wouldn’t do it herself.

The jailer contacted Edwards on Dec. 2 to tell her to remove the horses from his property because of their poor conditions.

All the horses on the property appeared to be malnourished, according to a police report. Because of their appearance, deputies called a veterinarian to the scene to check on them.

In her statement, the veterinarian said that except for a small pony, all the horses were extremely malnourished and did not have adequate feed available to them. The veterinarian further stated that the pen was overgrown with weeds and woody material that the horses had chewed on since hay and roughage were not provided for them.

Edwards was taken to the Sequoyah County Jail and the horses were taken to a safer location. She was released on $3,000 bond.

In a similar but unrelated case, an arrest warrant was issued Dec. 11 for Jason William Archie, 25, on a cruelty to animals charge.

Records reveal that a Roland police officer was called to the residence at 210 Carson Road in Roland about a possibly neglected animal.

The caller reporting the animal told the officer that a few days before, the people who lived at the Carson Road home had been loading things up as if they were moving. Later that night the woman noticed that no one was at the home except an American bulldog outside with no shelter. The woman said she stopped by the house Nov. 24 to check on the dog, which didn’t have any food -- except for an open box of Cheerios that had been spilled out on the front porch. The dog also had no water and no shelter. The woman, who brought the dog some food, then contacted the police department.

The gray and white female bulldog was in the same deplorable conditions when the police came to check on her.

Attempts to locate someone at the Carson Road residence on Nov. 24 and Nov. 25 were fruitless. On Nov. 25, however, a woman who requested anonymity said she felt bad about the dog because the owners packed up everything and left. They took a puppy with them, but left the adult dog behind. The woman said she had seen the owners return to the residence early in the mornings, but was unsure if they had been feeding or watering the dog properly.

The dog was taken to the Roland animal shelter.

On Nov. 26, the officer received contact information for Archie, who finally returned a phone call.

Archie told officers that he had checked on the dog Nov. 25 around 10:30 p.m. and it was fine. He insisted he had fed and watered the dog at that time.

Further attempts to reach Archie, from Nov. 26 to Dec. 3, failed.

In his report, the responding officer said he believed that if the woman hadn’t contacted police when she did, it is possible that the animal would have died from being deprived of food, water and shelter in the winter cold.