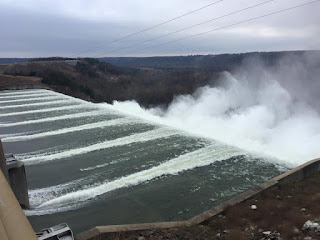 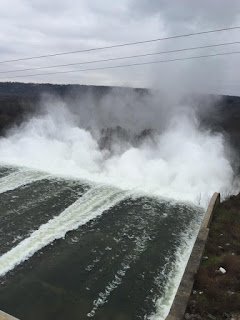 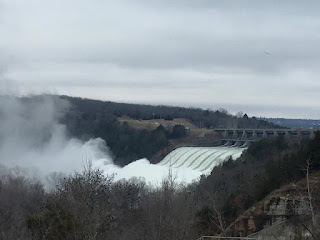 The Lake Tenkiller dam is releasing a record amount of water, a spokesman for the U.S. Corps of Engineers said Tuesday.

The 62-year-old flood control reservoir was releasing 35,000 cubic feet per second while trying to control the record-breaking rainfall that fell on the area over the Christmas holiday.

Brannen Parrish, U.S. Corps of Engineers Tulsa District spokesman, said the lake is at 665.9 feet, as of 1 p.m. Tuesday, which is 33 feet above its normal elevation at 632 feet. The record high level at Lake Tenkiller was 666.36 feet earlier this year.

Parrish said it was predicted the lake would reach 666.8 feet by Tuesday, which would set a new record level, but that had not occurred as of 1 p.m.

“Lake Tenkiller is about 99 percent full,” Parrish said, “but all we can do is make predictions.” And predictions can change due to a number of factors.

Parrish said not only is the Illinois River flowing into Lake Tenkiller, but the runoff from the hilly terrain and the watershed area around the lake is also headed for Tenkiller. Consequently, the lake level is continuing to rise.

Parrish pointed out that Kerr Lake, which is 1.6 feet above normal and holding steady as of Tuesday, is not a flood-control lake and what flows in pretty much flows out at the Robert S. Kerr Lock and Dam south of Sallisaw. That dam was releasing 325,900 cubic feet per second (CFS) as a 1 p.m. Tuesday. The incoming flow was at 353,000 CFS, Parrish said. The Webbers Falls Lock and Dam was releasing 345,000 CFS. Both are considered part of the navigation system, not part of flood control.

Parrish explained that engineers are trying to hold back as much water as possible at Tenkiller to control flooding downstream.

“We try to hold back as much water as we can to give downstream time to flush water out,” Parrish said, “then we try to release as slow as we can. The purpose of flood control storage is to hold water back to protect life and property. We are doing everything we can to accomplish that. Our engineers are monitoring the situation.”