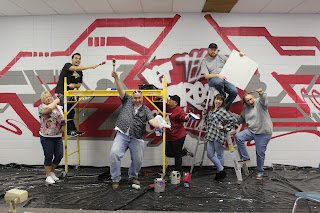 The owners and staff at The Mix 105.1 had fun taking on a room remodel at the new Sequoyah County Boys and Girls Club in Sallisaw Tuesday. The club will open in the old middle school media and science buildings on Jan. 4 after remodeling is complete. County businesses and professionals are assisting with the remodel by donations or volunteering. KXMX staff who painted and repaired ceiling tiles Tuesday are, from the left, Marilyn Eckstein, Justin Pettit, Darren Girdner, Delanna Nutter, Kyle Garner, Gabrielle Bolin, and Sally Maxwell (not pictured, Kim Girdner).

The Boys and Girls Club of Sequoyah County will be able to accept more youngsters once the club moves into its new facility at the old Tommie Spear Middle School in Sallisaw. The club and the Sallisaw School System reached an agreement earlier this year to lease the old library-media and science building to the club.

Club officials hoped to move into the new facility by the end of the Christmas break, on Jan. 4, but remodeling, and the cost of the remodel, loomed to delay the move.

Then community businesses and organizations stepped in. The club will have a total of six rooms in the new buildings - three large and three small. The remodel of the rooms is being donated by the money and hard work of community members.

Long said the larger rooms will become two game rooms and a computer room. The smaller rooms will be for different age groups for Power Hour tutoring, the Smart Moves character leadership program and for an arts and science lab.

And sponsorship does not mean just money. There is sweat equity involved too. Long said, “The employees at the Redbird Smith Health Center have been lots of help, and we’ve had volunteers from my church and two volunteers doing their community service. We need all the help we can get.”

The volunteers and staff at the Boys and Girls Club have been painting the walls and stripping and refinishing the floors in the new buildings.

But more is needed. Even though room sponsorships were filled fast there are still many needs and many ways for the public to help. To accomplish that goal the club is keeping a wish list. The wish list includes:

Danielle Sainer is keeping the wish list for the club and anyone wishing to make a donation may contact her at 918-774-4292.

Long said when the new Boys and Girls Club opens, “It is going to be awesome. It’s going to be great for the kids.”

She said, “We will be able to have a lot more kids when we move. We had applications for 225 kids last year but we could only accept 100 to 110 a day” in the old building.

Long said the new facility is expected to be able to have about 225 boys and girls a day.