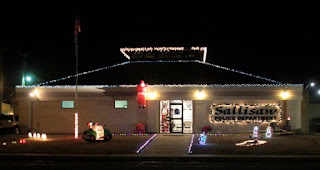 It’s not often a “crime scene” wins a Christmas decoration contest but that’s exactly what the Sallisaw Police Department did this year.

Police Chief Terry Franklin said the officers came up with the scenario themselves.

The scene depicts a melted Mrs. Frosty, surrounded by crime scene tape, while a Santa imposter attempts to escape by climbing the front of the police department.

But someone saw the crime. Those witnesses are the tiny snow people scattered around the front of the building. They quickly call the North Pole Police, who arrive in their own patrol car.

The investigation reveals that the meltor, or the murderer, left behind a weapon, a hair dryer that lays besides the pool of, or what is left of, the victim.

The North Pole Police call in their best investigator, their P-9, that’s for Pork 9, not K-9, also known as the miniature pig Miss Gizzy. The porker sniffs out the culprit, an imposter Santa Claus who is trying to steal the Christmas gifts. Mrs. Frosty found out Imposter Santa was trying to steal Christmas and he melted her to keep the secret.

Even though imposter Santa tried to escape, he was captured and taken into custody.

“And Christmas was saved,” Franklin said.

Decorations will remain in place until after Christmas for those who still wish to observe the crime scene, and speculate on what crime the police department will have to investigate next year.