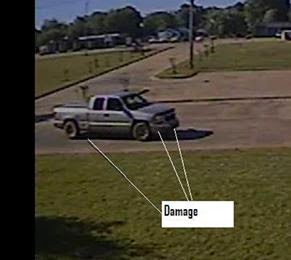 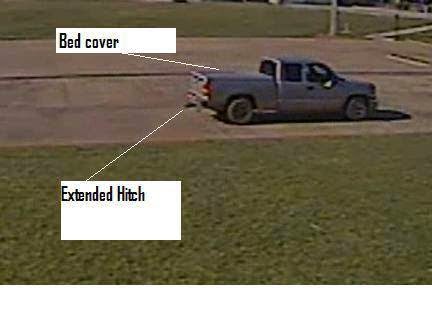 Muldrow Police are searching for the driver and passenger in the above truck. The photos were taken from security cameras at the Muldrow Park. Muldrow Officer Brad Roberts said two girls and two boys, all about age 14, were walking home from the park at about 5:20 p.m. Sunday when the group was approached by a man on foot who asked if they had any cigarettes. The teens said no. Then another man drove up in the pictured truck, which was positively identified by the teens, and grabbed one of the girls by the arm. Roberts said the girl jerked away and the group ran away. They did see the man on foot get into the pickup truck. The teen girl immediately told her mother, who contacted the police at about 5:30 p.m. Other witnesses also reported seeing the above truck in the park, and several leads have developed, Roberts said. The teens said both men were in their 20s. The man on foot was described as wearing a black hat and blue shirt. The man in the truck was described as having shaggy hair, and wearing a plaid shirt and navy shorts. He also appeared cross-eyed. Anyone with information may contact Muldrow Police at 918-427-3296. Stay tuned to KXMX for the latest news, or visit www.kxmx.com.
By Sally Maxwell
Senior News Editor