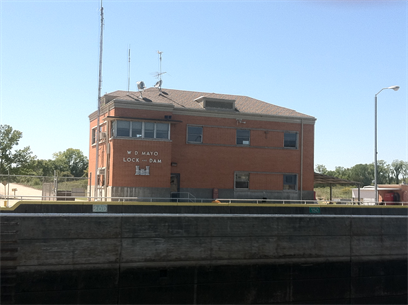 A plan is in the utility works at the Cherokee Nation to build and operate a hydroelectric plant at the W.D. Mayo Lock and Dam south of Muldrow. The Water Resources Reform and Development Act, or WRRDA, report released last week includes a section that would allow the Cherokee Nation to construct, operate and market a hydroelectric generating facility at the lock and dam. Cherokee Principle Chief Bill John Baker said, "We're glad this is now a renewable energy option for us and we look forward to exploring this and other opportunities. I worked with these lawmakers on this issue and I couldn't be happier with the result." The WRRDA act report was released last week by the WRRDA committee, on which U.S. Senator Jim Inhofe and U.S. Rep. Markwayne Mullin, both of Oklahoma and Republicans, serve. Mullin said, "WRRDA lifts a federal halt on the Cherokee Nation's ability to construct, operate and market power for a hydropower facility on the W.D. Mayo Lock and Dam." A spokesman for the Cherokee Nation said the hydroelectric facility is only being studied at the present time, and no concrete plans have yet been developed. The report now goes to the full House and Senate, which is expected to occur this week. Stay tuned to KXMX for the latest news, or visit www.kxmx.com. By Sally Maxwell, Senior News Director