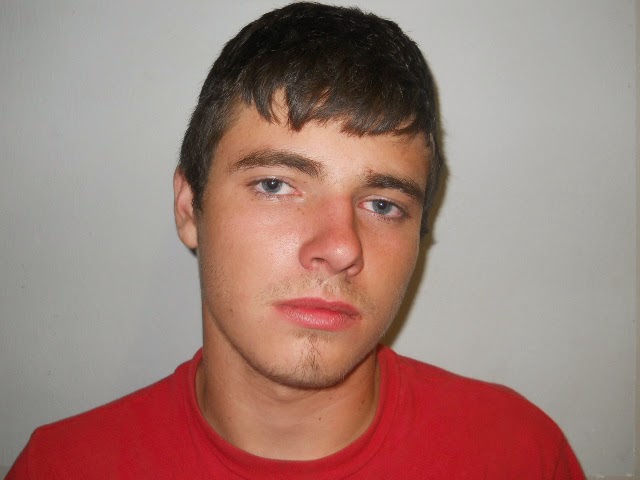 An arrest warrant was issued last week for an 18 year old Muldrow man accused of destroying evidence and obstructing an officer. The misdemeanor warrant is for Kyle Lewis Brannon, 18, shown above on the night of his arrest for public drunk on Sept. 1. According to the affidavit filed in Sequoyah County District Court in Sallisaw, Brannon and another teen tried to cover up the facts about an ATV wreck on Sept. 1 that left Christian Mayberry, 16, of Muldrow fighting for his life and trying to recover his former life. The information indicates Angela Gray, 38, at first told investigators that she was not involved in the wreck, but later admitted to being a passenger on the ATV with Mayberry. When the wreck occurred, Gray allegedly called for her son, who was close by, to help. The information alleges Brannon and the other teen, who has been arrested, tried to clean up the wreck and left Mayberry lying in a ditch. Two calls were made to 911 at about the same time, but when 911 dispatch called the phone number back, no one answered. The 911 call which led to authorities finding the site was made three hours later, according to court records. According to the affidavit, Brannon told investigators that an ice chest was hidden and beer poured on Mayberry in an effort to wake him up. Mayberry suffered a traumatic brain injury in the wreck, and has been in rehabilitation ever since. A 5K race will kick off at 8 a.m. April 26 from the Muldrow Veterans of Foreign Wars Post in Muldrow to raise money for the family. More information on Christian's recovery may be found on the Pray for Mayberry Facebook page. As of the time of this posting, Brannon was not in the Sequoyah County Jail. For the latest news, stay tuned to KXMX, or visit kxmx.com.
By Sally Maxwell
Senior News Director