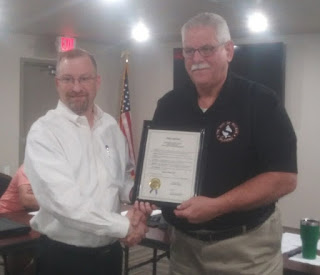 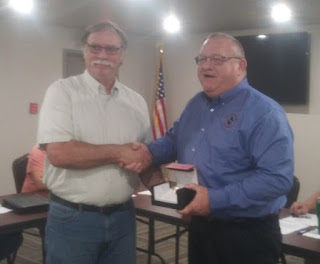 Meeting for the first time in the newly remodeled Civic Center, Martens praised Abell’s tireless efforts and said he was “impressed by his unwavering dedication” to the city of Sallisaw before presenting him with an honorary plaque.

“(Freeman) was instrumental in where the animal control service is today. It’s a lot better today than it was,” Skelton said.

In other business, the city council unanimously approved a resolution providing for increases in electric service rates. Skelton said city staff will soon be sending out a letter to Sallisaw customers regarding the increases, which will help finance needed infrastructure projects throughout the city.

“No one likes electric rate increases,” Skelton said, “but these are needed.” Martens also cited the need for rate increases, saying, “this is something we inevitably have to do.”

The council split on a decision to approve an ordinance allowing the sale of alcohol at outdoor events such as the upcoming Diamond Daze celebration. Julian Mendiola was the only commissioner who voted against the measure.

“A lot of people see Diamond Daze (and other similar celebrations) as family events. I’d like to see it stay that way,” Mendiola said. “I don’t see why we need it.”

Shannon Vann disagreed with Mendiola, saying, “Similar events with alcohol (sales) bring in a lot of people” and there are “a lot of controls in place” that will keep events from getting out of hand. Vann said that according to a recent workshop he participated in, all vendors will be held accountable for serving alcohol to anyone under 21. “If one vendor does it, all of them get fined,” he said.

Commissioners echoed the need to stop underage drinking at events and city officials said they are considering providing armbands or wristbands that would allow those over 21 to drink alcohol.

The panel also approved a staff request to declare 30 Glock weapons used by the Sallisaw Police Department as surplus for trade. Chief Terry Franklin said the trade will allow his department to upgrade their firearms.

The council also green-lighted a purchase order in an amount not to exceed $25,000 to IPS Construction of Sallisaw for remodeling work on the front of Stanley Tubbs Memorial Library. Another project at the old Post Office, 113 N. Elm, got approval to engage Tim A. Risley and Associates for architectural design services related to the planned remodel. That purchase order will be for $21,000, plus reimbursable expenses.