Sallisaw McDonald’s Is Member of the Month

McDonald’s in Sallisaw was named the Sallisaw Chamber of Commerce Business of the Month for August. Chamber President Cheryl Mills, left, presented the award to, from her left, David Hadley, Jayne Hadley and John Hadley. The award was presented at the chamber’s Membership Luncheon on Wednesday.

Chad Ford, right, from the Sequoyah National Wildlife Refuge south of Vian was the guest speaker at the Sallisaw Chamber of Commerce Membership Luncheon Wednesday at Carl Albert State College. After the meeting he visited with chamber members including Matt Caldwell, right, from National Bank of Sallisaw. 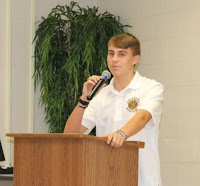 James Limbaugh, a senior at Sallisaw High School, told Sallisaw Chamber of Commerce members about his experiences at The American Legion’s Boys State and Boys Nation this summer. Limbaugh spoke at the chamber’s Membership Luncheon on Wednesday.

McDonald’s in Sallisaw, owned and operated by the Hadley family, was named the Sallisaw Chamber of Commerce Member of the Month for August at the chamber’s Membership Luncheon on Wednesday.

Accepting the award were John and Jayne Hadley and their son, David.

Chamber President Cheryl Mills told a brief history of the Hadley’s and McDonald’s when presenting the award. She noted that John Hadley went to work for his brother Jim at a McDonald’s in Fort Smith while John was still in college working on a bachelor’s degree in business administration. After graduating he began work at the Sallisaw McDonald’s restaurant in May 1985 and a few years late bought the restaurant from his brother. It is one of six McDonald’s owned by John and Jayne Hadley and their children, David, Molly and Annie.

Mills reported the Hadleys have contributed much to the community, including a recent $25,000 donation to the Sallisaw Sport Complex. They are also active supporters of the Ronald McDonald projects.

John Hadley told the crowd, while accepting the award, “We’re proud we live in this town, and we thank you for your support.”

Chad Ford, outdoor Recreation Planner at the Sequoyah National Wildlife Refuge south of Vian, was the guest speaker at the meeting.

He reported the refuge has over 75,000 visitors a year.

“This is a good opportunity for us to speak about what we do at the refuge,” he said.

He said the refuge offers youth and adult hunts for deer, waterfowl, upland game such as rabbits and squirrels, and feral hogs.

Fishing is one of the most popular programs, and refuge personnel hold a fishing program at Brushy Lake every year.

“This is one of the programs we’re most proud of,” Ford said, because hundreds of fifth graders have gone through the program.

He recommended bird watchers join the Cherokee Nation Audubon Society. Society volunteers hold bird watching at the refuge where school children identify as many birds as they can in 12 hours. Ford noted the refuge has 12 miles of roads and many viewing platforms that can be used for observing and photographing the wildlife in the refuge.

Ford said over 900 school children in the county have heard him speak on environmental issues related to the refuge, and he regularly leads eagle tours and takes nursing home residents on tours of the refuge.

He noted interpretive signs are located at the refuge trailheads, and the program will be expanded in the future.

Ford said the refuge recently received over $150,000 which is being used to remodel the visitors’ center and to finish road paving.

James Limbaugh, a senior at Sallisaw high School, told chamber members about his experiences at the American Legion’s Boys State in Stillwater and Boys Nation in Washington, D.C., this summer.

Limbaugh said he learned much at the two programs which teach youngsters about government and leadership.

Limbaugh said he ran for five different positions at Boys State and lost them all, one by only one vote, but that he won the post of senator to attend Boys Nation in Washington, D.C.

Limbaugh said he learned that the country’s politicians often fight among themselves, but “They are all friends at the end of the day. They leave it all on the Senate floor.”

Limbaugh said he learned that remaining open to friendship is most important.

-Pop-Up Prairie Days will be held from 9 a.m. to 4 p.m. Sept. 9 on the lawn at Stanley Tubbs Library in downtown Sallisaw. The event includes food, music and over 40 vendors.

-The Bassnanza Fishing Tournament will be held Nov. 4.

-Evviva! will be held Nov. 18 at the Cherokee Casino in Roland.