Sallisaw, Businesses Drying Out after the Flood 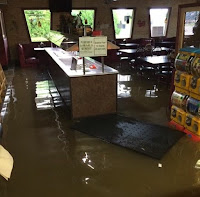 The City of Sallisaw is assessing roads, sewer and water lines for possible flooding damage, while businesses on Sallisaw’s east side are busy cleaning up from flood waters that swamped and closed their businesses down on Sunday morning.

Sallisaw City Manager Clayton Lucas said Monday, “We are in the process of assessing city roads and sewer lines for possible damage. FEMA will probably be involved.”

The Federal Emergency Management Agency (FEMA) helps governments and others recover financially from disasters, if approved.

Harold S. Powell Jr., owner of Simple Simon’s Pizza, had to deal with several feet of water, and several employees were busy Sunday afternoon pushing water out of the building. He said he hoped to reopen by Monday afternoon, but no one was answering the phone on Monday.

Linda Martin, who co-owns the golf course with her husband James and son and daughter-in-law, Jay and Christin Peerson, said the golf course will be ready to go by the weekend, if no more flooding rains hit the area.

She said Monday, “The water is gone. We had no damage and no damage to the bridges. All we have to do now is remove the debris that came down with the water. We’ll be ready to go this weekend.”

This is not the first time the golf course has flooded, but Sunday’s flood was the worst she has seen, Martin said.

“What a relief when the water began to recede Sunday afternoon,” she said. “We are very happy, and very fortunate.”

Employees at the Sallisaw Inn were at work Monday cleaning the rooms. A spokeswoman said the owner-manager Ken Patel was unavailable because he was cleaning rooms. Three to four guests at the motel and the employees had to be evacuated on Sunday, the spokeswoman said.

“It was bad, it was high, rushing water,” she said. “I thought ‘Oh my gosh!’” She said she could feel the force of the current as everyone was evacuated in an SUV.

She said the flooding was mostly on the front and back of the motel, and the water had receded by 1 p.m. on Sunday.

A spokesman for Ed’s Truck Stop across Cherokee Street from the Sallisaw Inn said the flood waters did not get into the truck stop or diner, although it did cover the truck stop’s parking lot. The truck stop suffered no damage, he said.

Lucas said the east end of Sallisaw is flanked by two creeks, Hog Creek just west of the truck stop and Little Sallisaw Creek, just east of Interstate 40. Both flooded because of the heavy rain early Sunday.

“We had 4.5 inches of rain in Sallisaw,” Lucas said, “but 8 inches of rain fell north of Muldrow. That rain all ran down into the creeks. Every creek we’ve got flooded. We had a lot of water,” he said.