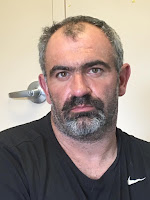 Muldrow police participated last week with other law enforcement agencies in a joint operation and investigation that may have solved the theft of 40 bee hives from the Muldrow area as well as other alleged crimes.

Friend is charged in Sequoyah County District Court, Sallisaw, with grand larceny, filed on May 19, 2016, and trespassing, filed on April 28, 2016.

Friend was arrested along with eight others, and all face 24 counts of distributing methamphetamine.

In Sequoyah County, Lawson said, “It is alleged Friend orchestrated the theft of about 40 bee hives. Friend will have to complete all of his court appearances in Federal Court before being transported to Sequoyah County.”

In June last year J.D. Hill of Hilltop Gardens in Muldrow reported 40 hives were stolen from one of his yards and three weeks earlier 10 hives were stolen. Some of the hives, he said, were simply knocked over and broken.

Hill said his bee hives produced about $2,400 in revenue every two weeks.

Friend was a suspect at the time, but due to the investigation, his name was not released as a suspect.