Graham to Compete at Sallisaw Rodeo 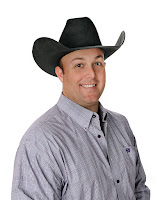 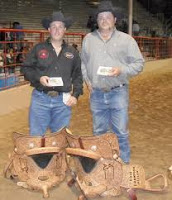 Destry Graham, 34, has been in the saddle with a rope in his hand for most of his life.

A professional rodeo athlete, Graham is a Ram National Circuit Finals Qualifier in team roping, and a many-time qualifier to the CRRA, ACRA, CNFR and Prairie Circuit Finals.

Rodeo fans will see Graham team roping for more honors at the 74th annual Sallisaw Lions Club IPRA Championship Rodeo Aug. 3 through 5 at the Sallisaw Rodeo Arena. Also on the schedule are the Rodeo of the Ozarks Rounders, a parade at 5:30 p.m. Aug. 3, the after-the-rodeo dances on Friday and Saturday nights, pony rides, wild horse races and the popular mutton bustin’.

Graham is the son of Donna and Dwight Graham, and the grandson of the late Inez and W.O. Cherry and the late Ed Graham and Mary Lou Jones. Graham is a Sallisaw High School graduate and has lived in Sallisaw his entire life.

He has been around livestock and ranching his entire life, right behind his dad, a blacksmith and rodeo competitor himself, while his mom, Donna Graham, watched over both and counted points. Donna is often rodeo secretary of the many rodeos in not only the area but the nation.

It’s a family affair with the Grahams.

“I’ve been roping since I was 9 or 10,” Graham recently recalled. “It’s a family endeavor. Dad’s rodeoed forever.”

Graham won at the junior level, at the high school level, was reserve at the college level and champion at several regional levels. He’s won so many awards – saddles, buckles, even a pickup truck – that he can’t remember them all. He does recall he won the truck at a Booger Barter Team Roping.

The header in team roping, Graham said his fastest time ever was a 3.4 second catch he scored in November at the River Bend Arena in Inola. He has a video of that ride on his cell phone and can whip it out and push play nearly as fast as he caught that steer.

Graham said he has been riding two of his friends’ horses, both of which are “real good.” And he likes to enter team ropings twice which is allowed by the sanctioning organizations.

Graham is currently listed in sixth place, with $2,747.79 in earnings through July 13, with the American Cowboys Rodeo Association (ACRA), which is affiliated with the International Professional Rodeo Association (IPRA), the association that sanctions Sallisaw’s rodeo.

However, proving Sallisaw is home to great ropers, the leader in the same event is Eric Flurry, also of Sallisaw and a friend of Graham’s.

Rodeo is a friendly, family sport, and Graham plans to add to it on Nov. 18. That is when he will marry Ashley Covington, math teacher at Sallisaw High School and a sales associate with Graham at All Pro River Valley Realty. Ashley doesn’t rodeo, but she does like to watch Graham team rope, he said.

Graham concluded, “All of this rodeoing is not possible without an incredible fiancé and family.”