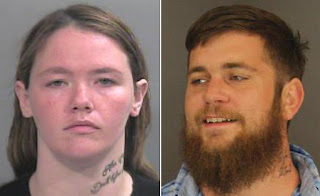 A Sequoyah County couple, believed to reside in the Nicut area, was taken into custody Saturday by the FBI for questioning.

Alan and Daphne Crawford are being held in the Fayetteville (Ark.) Police Department to be questioned by the FBI.

The Crawfords were arrested Friday for terroristic threatening after they allegedly threatened a waitress in Prairie Grove because they were not satisfied with the meal and the service, according to reports. He was released the same day on a $10,000 bond. She was released on a $3,500 bond.

The FBI released the following statement, “The two individuals were arrested with the assistance of state and local partners as part of an ongoing federal investigation. Unfortunately, at this time we can provide no additional details. We can state that we are not aware of any threats to the public.”

The couple claim they are Muslim.

On Friday evening the Sequoyah County Sheriff's Department along with the FBI and the Sallisaw Police Response Team conducted a search warrant at a residence located in the Nicut area. Unspecified items were seized during the search.

The residence belongs to Alan and Daphne Crawford. The Crawfords were not home at the time and no arrests were made said Sequoyah County Sheriff Ron Lockhart.

The couple was escorted from Central Mall in Fort Smith in December after they were seen taking video inside the mall.