Casey’s to Open in the Fall 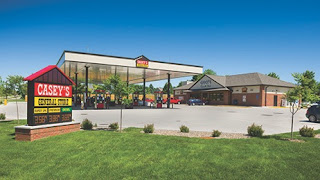 Casey’s General Store in Sallisaw will open in late October or early November, a company spokesman said this week.

Sam James, a financial analyst and media spokesman for Casey’s General Store Inc., said, “We are excited about opening in Sallisaw.”

He said the store, for which dirt work has begun, should be open by the end of October if construction goes well. If hampered by weather or other delays, the opening might be put off until early November.

The store is listed on Casey’s website as “opening soon.” The address is 1420 W. Cherokee. The store property is at the corner of Cherokee and No Name Street and driveways on both streets will allow access.

Casey’s and its stores contributed more than $4.5 million last year to community and charitable organizations and events.

James said Casey’s likes to focus on small communities. The company, he said, “is in a fairly aggressive growth mode and we plan 90 to 100 new stores this year. Two-thirds of the stores are in communities with populations of 10,000 or less.”

When the time comes for Casey’s General Store in Sallisaw to open, James said a grand opening with specials and deep discounts will be held. Until then, those who are excited about Casey’s new store may go on line and sign up for Casey’s mobile app which allows for ordering online, requesting delivery, receiving coupons and news about promotions and specials, entering sweepstakes and even playing games.

“We are looking forward to being in Sallisaw,” James said.