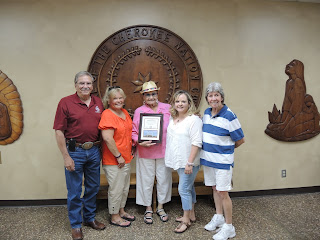 The Cherokee Nation honored four Korean War veterans with the Medal of Patriotism in June.

Among those honored was Bunch native Eva D. Rider Tallon.

Cpl. Rider Tallon was born June 13, 1930, in Bunch and joined the U.S. Army in 1951. She attended basic training at Fort Lee in Virginia and surgical technician school at Brooke Medical Center in San Antonio.

Rider Tallon was then stationed at Fort Lawton in Washington, where she served as a company clerk. While at Fort Lawton, she received “Soldier of the Week” honors and attended the University of Seattle. She was then deployed to the 8168th Army Hospital Unit in Yokohama, Japan, where she served as the editor of the battalion newspaper and attended Red Cross activities for wounded soldiers from the Korean War.

Rider Tallon received an honorable discharge in 1954 and earned several ribbons and medals for her service.

Others honored are Jack Merle Gardner, 74, of Tahlequah, George Edward Dewayne Johnston, 85, of Inola, and Ralph George Grass, 79, of Choteau. They all received the Medal of Patriotism from Cherokee Nation Principal Chief Bill John Baker and Deputy Chief S. Joe Crittenden acknowledging their service to the country.

Each month the Cherokee Nation recognizes Cherokee service men and women for their sacrifices and as a way to demonstrate the high regard in which all veterans are held by the tribe. Native Americans, including Cherokees, are thought to have more citizens serving per capita than any other ethnic group according to the U.S. Department of Defense. To nominate a veteran who is a Cherokee Nation citizen, please call 918-772-4166.