Younger Students Encourage Others During Testing 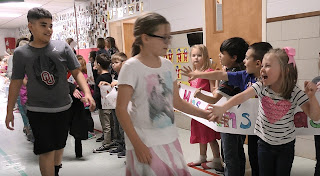 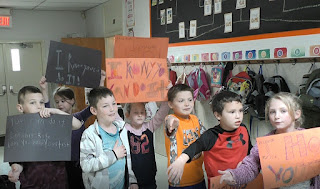 Liberty Elementary students line the halls to encourage Eastside students prior to testing.

The testing weeks at school always seem so stressful, but Sallisaw elementary schools are hoping to take some of that stress away.

Sallisaw’s Liberty Elementary students, in grades PreK through second, lined the hallways as the third, fourth and fifth grade students from the adjacent Eastside Elementary walked through the hallways. They held up signs of encouragement and shouted cheers to inspire the older students to do well on the tests, according to Liberty principal Toni Jasna.

“We don’t want our students fearful of testing,” she said. “We just want it to be another normal day. Our teachers at Liberty have adopted a classroom at Eastside and they’ll send everyone letters and little snacks – something to just encourage them to do their best on the test.”

The “test,” to which Jasna refers, is the Oklahoma School Testing Program, standards-based assessments for grades 3-8 covering mathematics, English language arts and science. Testing takes place for the Eastside students from April 1-19; for Sallisaw’s middle and high schools, it happens during the entire month of April.

Jasna said this is the third year for the success walk, and they have found it does have a big impact on the students.

“It makes a huge difference in the mindset for these kiddos,” she explained.

Jasna said school officials feel that not only can the students encourage each other, but that parents should get involved as well.

“We encourage the students and the parents that they have to take this seriously,” she added. “These tests show growth and what we’ve been teaching the students. They need a good night’s rest and a nutritional start for the day.”