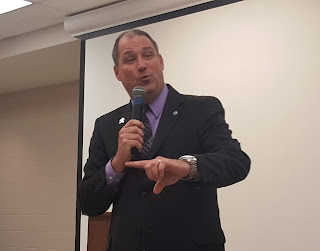 Carl Albert State College has added a new competitive athletic program to its lineup, and these collegiate athletes may not even break a sweat.

Dr. Jay Falkner, CASC president, told the Sallisaw Chamber of Commerce membership at its monthly meeting Wednesday that the college was the very first junior college in the state of Oklahoma to have an esports arena for competitive electronic athletics.

College esports began almost 10 years ago as different schools formed electronic sports clubs, playing a variety of electronic games, including League of Legends, in collegiate tournaments. Last year, there were more than 73 college varsity esports programs in the National Association of Collegiate Esports, or NACE.

Last month, CASC became a member of NACE and will be the first community college in Oklahoma to field teams in Poteau and Sallisaw.

“More people tuned in to the finals last year than the Super Bowl,” Falkner said. “This is big business. Hopefully, we’ll draw some people into our area for tournaments.”