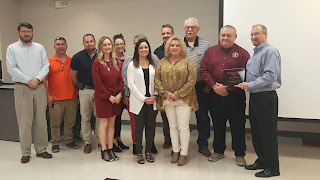 The City of Sallisaw took center stage at the Sallisaw Chamber of Commerce’s monthly membership meeting Wednesday, as it was named the Chamber Member of the Month for March.

Chamber President Marley Abell cited a long list of the city’s accomplishments from the past few months, from securing the relocated veterans center to a new landfill cell to new chamber offices. Work continues on a new gazebo at the library and the sports complex, along with walking trails, plus construction gets underway soon on the new splash pad, with completion expected by mid-June.

“As the staff prepares for the fiscal year 2020 budget, they continue to look at additional water, sewer, street, park and city improvements,” Abell said.

After accepting the award along with many of the city staff members, City Manager Keith Skelton shared some very good news about the veteran’s center.

“We were notified yesterday by the Oklahoma Department of Veterans Affairs that they did receive their federal funding for this center,” Skelton told the chamber membership. “There was a thought they wouldn’t receive this money until the next fiscal year, but they did good and achieved the funding this year.”

Skelton said the ODVA is now working on timelines to move forward. He added that this collaborative project is a true indication of how a community can come together to accomplish great things.

“We look forward to getting the veterans center in operation here as quickly as possible and welcoming the veterans to give them the quality of life they deserve,” Skelton said.

In other chamber business, Abell said planning was underway for Diamond Daze, with the possibility of bringing in a large Christian group for entertainment. The chamber has created a veteran’s committee, and announced lots of spring activities coming up, including the Hot Pickin’, Finger Lickin’ BBQ Contest and Band Fest, slated for April 26-27 and co-sponsored by Main Street Sallisaw and the Sallisaw Chamber.

As chamber members dined on a pasta lunch catered by Roma’s, Dr. Jay Falkner, president of Carl Albert State College, which hosted the membership meeting, shared exciting news about the college, including Carl Albert being the very first junior college in the state of Oklahoma to have an eSports arena for competitive electronic athletics.

Sallisaw Police Captain Beau Gabbert then shared information about House Bill 2597, which is the state’s new constitutional carry law that that goes into effect Nov. 1.