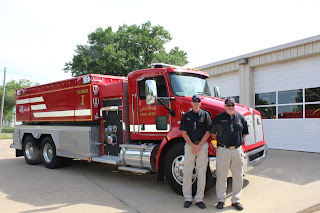 “Greg was instrumental in getting funding from the Cherokee Nation and U.S. Department of Agriculture,” Armstrong said. “So we’re having a sign made that says ‘Big Greg’ that we’re going to put on the new pumper-tanker.”

Walters, of Nicut, is also a volunteer firefighter.

The pumper-tanker was needed, Armstrong explained, because it will transport 3,000 gallons of water to areas where firefighters often don’t have enough.

Armstrong said, “It will help on rural fires, and on fires on the interstate with semis and other vehicles. It is always a safety concern to firefighters when there is not enough water.”

The new truck, a 2017 model, will pump 1,250 gallons minute, and it joins a fleet of eight other fire and rescue trucks at the Sallisaw Fire Department.

Armstrong and Assistant Chief Steve Padgett flew to Texas on Tuesday to pick up the new truck from Fouts Bros. and drove the truck back on Wednesday. Thursday night Sallisaw firefighters finished the truck by adding hoses and other equipment.

“The truck is now in operation,” Armstrong said Friday.