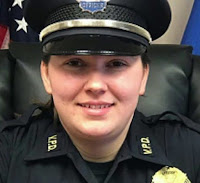 Larry Vickers, Town of Vian attorney, released the following statement Monday morning on behalf of the town and himself. The statement addresses the resignations of Vian Police Officer Lindsey Green and Vian Police Chief Ted Johnson and the circumstances surrounding their resignations last week.

The statement is published here in its entirety, with the word [sic] where possible spelling errors or omissions are detected.

The officer’s report, provided by Vickers, is included at bottom of story.

The statement reads: “Trust is the foundation of the relationship between public officials and the community they serve. When allegations of political favoritism cast a shadow over that trust, only transparency will shine a light on the truth and confirm that the public officials are serving the needs of the community. Lindsey Green and Ted Johnson resigned their employment with the Town of Vian’s Police Department. It has been suggested that their resignations were occasioned by the decision to dismiss a municipal citation issued by Green to Josh Smith, the son of a Town Board member [Jr. Smith], and that the decision to dismiss the ticket was based on political rather than legal considerations. The ticket was dismissed based on there being no apparent probable cause to initiate a traffic stop of Smith and not because of any family relationship.

No member of the Town Board, or their family, is above the law. On Thanksgiving Day, November 24, 2016, Smith was stopped and ticketed by a Town Police Officer for driving under suspension. Smith’s relationship to a Board member did not dissuade the officer from stopping or citing Smith, and did not dissuade the Town from pursuing the ticket and obtaining a judgment against Smith. Nor was there any favoritism displayed in September of 2016 when Josh Smith received two traffic citations and the Town received judgements for both those citations.

On May 2, 2017, Officer Green was advised that Smith was seen driving and had been cited 6 months prior for driving under suspension referring to the November 2016 [sic]. A report that a driver’s license was suspended in the past is not enough to justify conducting a traffic stop without verification that the licenses [sic] is currently suspended. Officer Green could have simply checked the status of Smith’s license with dispatch and confirmed whether Smith’s license was valid or suspended. She did not do so prior to stopping and detaining Smith. This is confirmed by her body cam’s footage.

It has been reported that Green was confronted at Town Hall by the Town Attorney and that he ‘yelled’ at her. This is false. It was Green who first contacted the Town Mayor at his home, telling him, and his wife, that she felt as though she had been ‘set up’ after making the arrest and then learning that Josh Smith was the son of a Town Council Member. Green then came into Town Hall where she again relayed her fear of being ‘set up.’ Green then spoke with the Town’s Attorney by means of one of the clerk’s cell phones and advised that her only basis for stopping Smith was a verbal statement from another off-duty officer that Smith’s license was suspended when he was stopped six months prior. After questioning Officer Green about the stop, the Town Attorney advised that based on the facts provided to him by Officer Green, there would not be sufficient probable cause for the stop. Therefore the ticket would be dismissed. The Town Attorney relayed that there was no problem, other than the lack of probable cause, and thanked Officer Green for her honesty in relaying the situation, despite her apparent stress due to her belief that she was being ‘set up.’

After arresting Smith, Green prepared an arrest report which indicated that the sole basis for the traffic stop was the verbal report from an off duty officer that Smith was cited six months prior for driving under suspension. That report was reviewed and approved by the assistant Chief and by Chief Johnson. That was the same information that was supplied to the Town Attorney by Officer Green over the phone earlier that day. The Town Attorney dismissed the ticket based on the fact that there appeared to be no probable cause justifying the traffic stop. Probable cause is the cornerstone of the protections provided by the 4th Amendment to the United States Constitution. Without probable cause Green could not detain Smith on a traffic stop.

A copy of the arrest report has been circulated which indicates that the probable cause for the stop was that Green observed Smith commit a moving violation. The Town is providing a copy of the original arrest report which was prepared and signed by Green, the Assistant Chief and by Chief Johnson and subsequently filed with the Municipal Court Clerk on May 3, 2017. That report contained no reference to any moving violation Green may have observed. Nor did any of her body cam footage provide any evidence regarding the reason for the stop other than a suspended driver’s license. The Town has been able to confirm by the Biometric Services Manager of the Oklahoma State Bureau of Investigation that the sentence about observing a moving violation was added to the report by Officer Green two hours after she prepared the original report which was signed by herself, the Assistant Chief and Chief Johnson. The version of the report which references a moving violation has, to the Town’s knowledge, never been signed by Officer Green, by any supervisor and was never presented to the Municipal Court Clerk for filing. The Town has no firsthand knowledge of where this altered report came from. It was never provided by Town Hall staff. In addition, when inquiry was made to Chief Johnson and his Assistant Chief, both denied having any knowledge of the amended language being added to the report. Neither report had any statement regarding Green’s allegation of being ‘set up,’ even though she relayed or was overheard relaying that statement to more than seven individuals, including the Town Attorney.

Finally, and most disturbing, Officer Green reported that she consulted District Judge Jeff Payton and that judge Payton advised her that she had probable use for the stop and that the Judge ‘advised me on the legal side of the incident.’ District Judge’s [sic] do not provide this kind of legal counsel to officers. They are bared, ethically, from giving any legal advice. In this case, the Town’s Attorney confirmed that Judge Payton did not provide any advice to Officer Green other than to direct her to consult the Town Attorney. The Town would like to extend its sincerest apologies to Judge Payton for having his name associated with this alleged unethical behavior.” 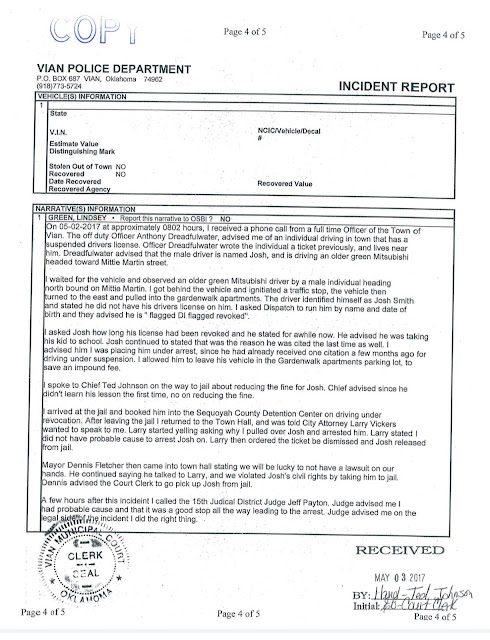 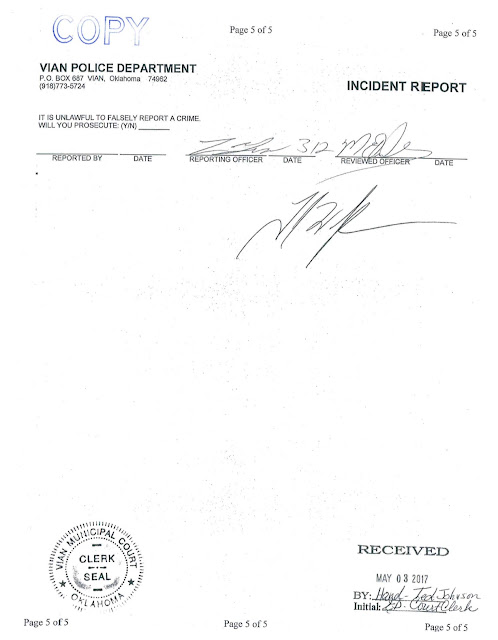