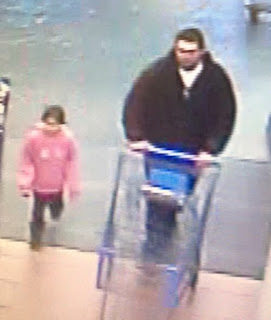 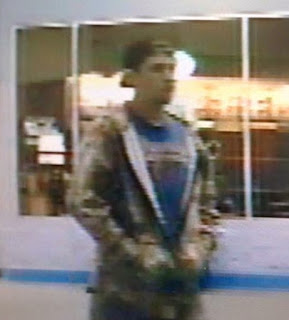 Sallisaw police are searching for two men who stole, or attempted to steal, merchandise from the Sallisaw Walmart store in two separate incidents.

Lt. John Owens reported the first incident occurred on Jan. 8 when a Hispanic male of large stature (above, top) entered the store with a small female child, age 4 or 5, then loaded computer equipment and a microwave into a cart and attempted to leave the store through the garden center without paying. Walmart employees tried to stop him and Owens said the suspect then shoved the cart at the employees, grabbed the child, and fled in a white or cream-colored Chrysler 300. The merchandise was recovered.

In the second incident a white male (above, bottom) entered the store at 3:30 a.m. on Jan. 16. The man broke the glass in the jewelry case and escaped with between $600 and $1,000 worth of jewelry. The suspect was in the store for about three minutes. Owens said the suspect then ran from the store and jumped into a rust-colored, older sedan waiting outside with a driver.

Both suspects, captured on film on the store’s surveillance cameras, face felony shoplifting charges since the merchandise they stole or attempted to steal was worth over $500.