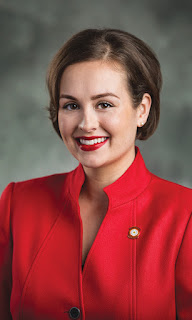 Horn, of Vian, will join two other Native representatives on the seven-person committee as they advise the secretary of treasury on taxation of American Indians, the training of Internal Revenue Service field agents, and training and technical assistance to Native American financial officers.

Horn’s nomination was endorsed by a resolution passed by the Inter-Tribal Council of the Five Civilized Tribes in April.

Cherokee Nation Principal Chief Bill John Baker said, “Lacey Horn's experience and leadership will be an invaluable asset to the U.S. Treasury’s tribal committee. I applaud the agency for creating this advisory panel to better address the unique issue facing tribal governments and native people. Treasurer Horn will be an advocate for growing the economic strength of Indian Country, furthering understanding of sovereign tribal nations and enhancing the relationships between tribes and other governments.”

Horn has served as the tribe’s treasurer since 2011, overseeing the Cherokee Nation’s more than $700 million comprehensive budget. While in office, Horn has helped upgrade the tribe’s bond rating, promoted financial disclosure and transparency, and received numerous Excellence in Financial Reporting awards from the Government Finance Officers Association.

She was also named to Oklahoma Magazine’s “40 under 40” list in 2012 and “Executive of the Year” by the Native American Finance Officers Association in 2014.

Horn said, “Taxation of tribes and their members is a significant matter that deserves particular focus. I thank Secretary of the Treasury Jack Lew for the appointment to this important advisory committee, and I look forward to working closely with him and the other tribal leaders who were appointed to the advisory committee.

“I am grateful to the Inter-Tribal Council of the Five Civilized Tribes for their support of Chief Baker’s nomination of me, recognizing that Oklahoma tribes have unique concerns related to taxation.”

Horn previously worked as a senior audit associate in financial services and in the internal audit and tax departments of Hunt Oil.