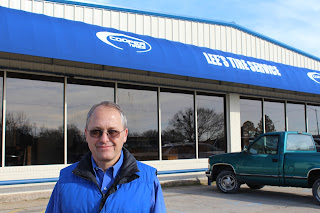 Allen Stewart, owner of Lee’s Tire Service, started the New Year in a new location. Stewart just moved the business over the New Year’s weekend to East Cherokee Street in Sallisaw. Stewart said the building was originally a Telestar grocery store but is best remembered as the old Marvin’s grocery store. It was most recently a Wall’s.

Lee’s Tire Service was started in 1974 by Wilburn Lee and was sold to Allen Stewart in 1992. Stewart kept the name and the old tire shop remained on West Cherokee until last weekend when it moved to its new location.

“We’ve got lots more room,” he said. “We got bottled up a lot at the other shop.”

The business also has eight employees including Stewart, and his long-time secretary, Cheri Teague, who has worked at Lee’s Tire Service for 25 years.

Stewart said it took a year to remodel the building, most of which was done by himself, his brother, Kenneth, and his son, Amos, who remains as the building manager.

Lee’s Tire Service not only provides and fixes tires, they also do quite a lot of service work, including brakes, shocks, alignment, chassis, oil changes, etc.

Business continued to boom at Lee's Tuesday morning as customers brought their vehicles to be worked on at the new location of a long-time Sallisaw business.