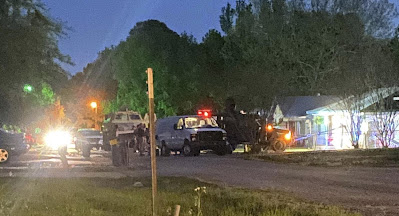 Authorities are searching a Roland residence in an attempt to locate an alleged armed gunman.

Officials stated that the standoff began when Cherokee Nation Marshals, accompanied by a SWAT team, attempted to serve an arrest warrant for Justin Sharp (age unknown). Sharp allegedly pulled a gun on a police officer Tuesday during a traffic stop. He then led officers on a high speed chase before escaping on foot.

When officers approached the residence on Thursday, Sharp allegedly fired shots and announced that he would harm himself or anyone that attempted to enter the home.

Officers could be heard using a loud speaker repeatedly trying to talk Sharp out of the house. Neighbors stated that a woman and child originally in the home were able to get out safely early in the incident.

We will update this story and bring you more details as they become available.