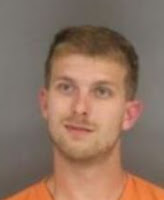 An Arkansas man, now facing armed robbery and other charges in Fort Smith, also has charges in Sequoyah County.

Marcus Jackie Sharp, 27, was arrested Tuesday after a chase in Fort Smith. Sharp was identified as the suspect in an armed robbery at the Pic-N-Tote on Phoenix Avenue at about 9 p.m. Tuesday. Police responded and pursued Sharp, who was riding a motorcycle, on Phoenix Avenue to Old Greenwood and South S Street where he wrecked the bike.

The police report indicates Sharp entered the convenience store just before 9 a.m., jumped the counter, displayed a handgun to the clerk and demanded the money from the register. No one was injured in the robbery and the amount of money taken was not released.

The Fort Smith police report lists Sharp as a resident of Van Buren.

Sharp was charged Tuesday in Sequoyah County District Court, Sallisaw, with endangering others while eluding police officers, running a roadblock, removing proper or affixing improper license plate, driving with a suspended or revoked license, and failure to signal on turning.

The charges resulted from a vehicle chase that occurred on May 25 when he allegedly led Roland police on a 15-mile pursuit through Roland, around the Cherokee Casino in Roland, north to Liberty School and WW Grocery then south toward Muldrow, running a roadblock in the process, before Sharp lost control and the vehicle he was driving slid into a ditch. At that point he was taken into custody.

According to the police report, Sharp was driving a Dodge Durango that was found to belong to Cookson Hills Electric but had not been registered since 2009. Police reported the chase reached 80 miles per hour at times, and several other vehicles and their occupants were forced to stop and leave the road to avoid collision with the Durango.

Removing proper or affixing an improper license plate, driving with a suspended or revoked license, and failure to signal on turning are all misdemeanors.

According to the police report, Sharp told the arresting officers that he fled police because he was on parole in Arkansas and was breaking parole by being in Oklahoma.

He was released from the Sequoyah County Detention Center on May 31 on a $2,500 bond.