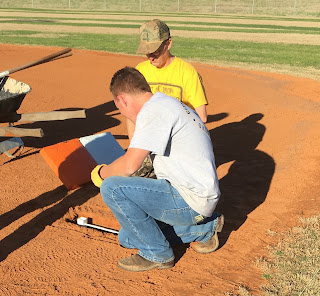 City Manager Clayton Lucas (front) volunteering his time alongside
Sallisaw Youth League board member Frank Sullivan III to ensure that the
new Sports Complex is ready for its first tournament this weekend.

The City of Sallisaw turned over the keys to the Sallisaw Sports Complex on Thursday evening, just in time for a 15-team softball tournament on Saturday.

Girdner said, “We are ready to go. We want to thank City Manager Clayton Lucas and his employees for all their help out here. Mr. Lucas was here working with us until 11 p.m. Thursday. The city has worked hard to get this facility ready to turn over to us.”

City employees and youth league members volunteered their help late into the night on Thursday to get the sports complex ready for the first tournament on Saturday. They were back on the job Friday and Girdner said they will stay until the complex is ready to go.

“We’ve been setting bases, grooming the field, getting the concession stands ready, etc. We have had around 25 youth league volunteers out here working hard,” Girdner said.

Girdner said this weekend was a “soft opening.” A grand opening is planned in a month or so.

“We also want to thank Lee Risley with his city crew, Blakely Smith and Steven Armstrong, Ron Lockhart for his support, and Clayton Lucas for the many hours he has spent on this facility,” Girdner said.

The $4 million Sallisaw Sports Complex was partially funded by a one-cent sales tax approved by Sallisaw voters. The first kids will take to the fields tomorrow and begin a new era in local youth league sports.