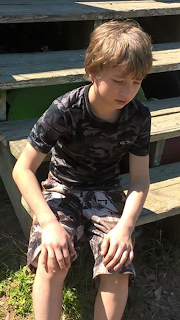 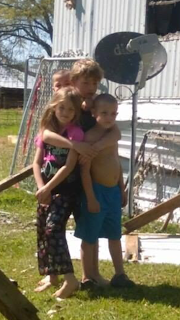 Ethan Daniel, 12, told his mother, Amanda Finney, that he wants to be “something great.” He has started out well. On Sunday evening he rushed into the family’s burning mobile home to rescue his little brother and sister.

“I’m really grateful my son was there,” Amanda said Thursday. “He’s a quick thinker. I’m so proud of him.”

Amanda said the family was staying in her mother’s mobile home on Gibbons Lane in Muldrow and was watching a burn pile in the front yard. They were watching from the front porch when apparently an ember blew in an open window and set her bed on fire.

Amanda said, “My baby (Jimmy, age 4) went in the house to get the dog. He came out and said, ‘Mommy there’s a fire in your room.’”

Amanda wasn’t sure of the 4-year-old’s report until the fire alarm went off. She said she rushed into the bedroom and grabbed a blanket to try and put the fire out.

“But it only made it worse,” she said. “Smoke was everywhere.”

Before the fire, her daughter, BreeAnna, 8, had gone in to take a bath and when the fire was found, Jimmy ran back into the house to save the family’s dogs.

Realizing his family was in danger, Ethan took charge and ran into the home. Amanda related that BreeAnna didn’t want to leave the house because she had no clothes on.

Amanda related, “She told Ethan ‘I can’t leave. I’m naked.’ He said, ‘I don’t care’ and threw her over his shoulder. Then he scooped Jimmy up under his other arm like he was a little football and ran out of the house.”

Even the family’s three dogs made it out of the burning home, but one, who belonged to Amanda’s mother, ran back in and died later of smoke inhalation.

Amanda said she doesn’t think her son has even thought about his heroic actions on Sunday. But daughter BreeAnna has.

Amanda said, “She said ‘He saved us. He saved our lives.’”

Amanda’s voice breaks when she reports how she and her husband, Brian, are now separated from the children because of living arrangements. She and Brian are staying at a motel, with the help of the Red Cross, but the children are staying elsewhere. Husband Brian is on crutches, trying to recover from a car crash in 2014 which badly damaged his leg.

The three oldest children returned to school in Muldrow on Wednesday.

“We lost everything,” Amanda said about the fire. “Everything’s gone.”

An account has been set up for the family at Armstrong Bank in Muldrow in Amanda’s name. Donations of clothing or household goods may be made at 901 S. Ada in Muldrow

Still, Amanda has her most important possessions, her family, including a third son, Brian, who will be 7 in May.