Gore Schools Closed for Day Thanks to Standoff with Felon 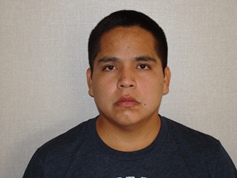 “He didn’t want to go back to prison,” reported Gore police after ending a standoff with a convicted felon Thursday morning.

Gore police and Sheriff Ron Lockhart reported Colton Dwayne Cheater, 25, surrendered to police at about 7:45 a.m. Thursday after an all-night search that concluded with Cheater barricaded in the bedroom in his ex-girlfriend’s mobile home.

Gore Officer Eric Cope reported Cheater apparently wrecked his vehicle at about 11:15 p.m. Wednesday north of Gore on State Highway 100. He then called his ex-girlfriend to tell her about the wreck, and left the scene. Cope was at the scene when the woman arrived to retrieve a car seat. Cope said she reported that Cheater had called her back and asked her to come pick him up.

When the woman refused, he threatened her over the phone, Cope said.

Cope said he traced the cell phone and found that Cheater was behind the trailer park where the woman’s mobile home was parked. Cope and another officer searched the trailer park but did not find Cheater. When they went back to the mobile home they spotted Cheater running up on the porch, breaking down the door and fleeing into the house. He then barricaded himself in the bedroom.

Cheater refused to come out of the bedroom and threatened the police officers too, Cope said.

Although Cheater’s threats were hard to understand, Cope said that “He basically did not want to go back to prison. He’s been to prison twice.”

Gore police called Lockhart at 6:30 a.m. who was able to talk Cheater out of the bedroom. Cheater surrendered at 7:45 a.m., and was taken to the Sequoyah County Detention Center in Sallisaw where he is being held until Gore police file charges against him. Cope said he was working on the charges Thursday afternoon.

“He faces a lengthy list of charges,” Cope said.

According to Sequoyah County Court Records, Cheater has two felony convictions – for second degree burglary in September 2011 and lewd molestation in March 2013 – and two misdemeanor convictions.

He is due back in Sequoyah County District Court in Sallisaw on May 8 for a Rule 8 Review. A Rule 8 review is done by a judge to determine if an offender is financially able to pay fines and fees. A quick review of the available records indicates Cheater owes more than $3,000 in fines and fees, and has paid about $940.

The incident resulted in Gore School officials closing school for the day for safety.