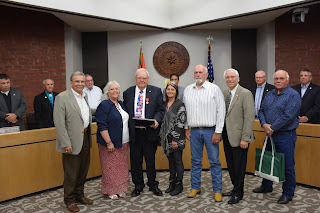 The Cherokee Nation honored two World War II veterans and a Korean War veteran with the Medal of Patriotism during the April Tribal Council meeting.

Seaman Lansford was born June 25, 1926, in Porum and enlisted in the U.S. Navy in 1944. Lansford attended basic training in Galveston, Texas, and was shipped to Manus Harbor in the Seeadler Islands, seven months after they were secured from the Japanese.

Lansford was stationed on the USS Harry Lee, an amphibious ship that carried troops and landing boats to areas of conflict. Lansford helped land troops on the islands of Luzon and Iwo Jima right before the American flag was raised. Lansford was honorably discharged in 1946 and received numerous medals, ribbons and stars for his service.

“I appreciate the Cherokee Nation and the honor that they have given me, and I’ll remember it as long as I live,” Lansford said.

Master Sgt. Sutton was born Jan. 7, 1920, in Muldrow and enlisted in the U.S. Army in 1941. Sutton and a friend were sent to baker’s school at Fort Sill. He was then sent to weapons school near Killeen, Texas, where he learned about all types of guns, grenades, explosives, mines and tank destroyers.

After weapons school, he was sent to Camp Kilmer, N.J. Sutton then went to Normandy for combat where he led a tank destroyer company. Sutton’s first large battle was the Argentain and Falaise Gap Battle that lasted eight days. When the Germans started the Battle of the Bulge, Sutton and his company were sent to Belgium. After the Battle of the Bulge, Sutton’s company crossed the Rhine River and headed to Munich, Germany. He was there when the victory in Europe was declared on May 8, 1945.

In 1946, Sutton re-enlisted and spent 20 months in Korea. Once stateside, he was an instructor at Aberdeen Proving Ground in Maryland. Sutton was then moved to Fort Hood, Texas, and promoted to master sergeant. Sutton eventually retired in 1962. In addition to the Army Commendation Medal, Sutton received the Good Conduct Medal with two bronze loops, American Defense Service Medal, European-African-Middle Eastern Campaign Medal with one silver service star and World War II Victory Medal.

Petty Officer Phillips was born May 7, 1934, in McIntosh County and joined the Navy two months before he graduated high school in 1952. After becoming a seaman apprentice, Phillips became an aviation apprentice where he served as the flight engineer on patrol planes. He ran every control on the plane except the throttle. Phillips trained pilots from Panama, Cuba, Jamaica, England, France, Argentina and America to operate personal transport planes.

In 1955, he was stationed in the Philippines and then served on the aircraft carrier USS Essex. Phillips participated in Operation Blue Bat. It involved 14,000 men who were supported by a fleet of 70 ships in the Mediterranean Sea. The operation ultimately caused Soviets to retreat from Lebanon.

Then, the Phillips and the USS Essex traveled through the Suez Canal and participated in Operation Formosa Strait by supplying munitions to Taiwan, which was engaged in conflict with China.

Phillips was honorably discharged in 1961 and received numerous awards for his military services. In 2012, Phillips was honored by graduating from Warner High School, 60 years to the day that he would have graduated had he not volunteered to serve his country.

Each month the Cherokee Nation recognizes Cherokee service men and women for their sacrifices and as a way to demonstrate the high regard in which all veterans are held by the tribe. Native Americans, including Cherokees, are thought to have more citizens serving per capita than any other ethnic group according to the U.S. Department of Defense.