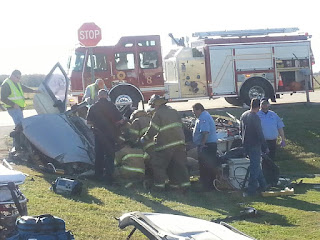 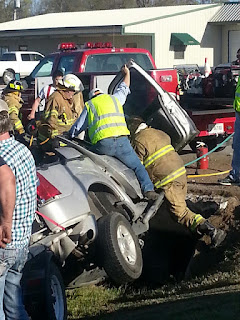 A one-vehicle crash on U.S. Highway 59 on Sallisaw’s south side may have been due to a medical condition, police report.

Rick Owens, 51, of Hackett, Ark., was driving south on U.S. Highway 59 when his small Ford pickup drifted left across the highway and went into a ditch on the east side of the road. Owens was flown by helicopter to St. Johns Medical Center in Tulsa. Contacted by police later, Owens told the officer he did not remember the crash. He said the last thing he remembered was driving on Dwight Mission Road.

The crash occurred at about 5:30 p.m. Monday, and Owens was reported trapped in the truck for about 40 minutes before he was freed by the Sallisaw Fire Department. Firemen also had to extinguish a small fire which erupted under the truck’s hood.

Police report Owens has been moved into a private room at the hospital.