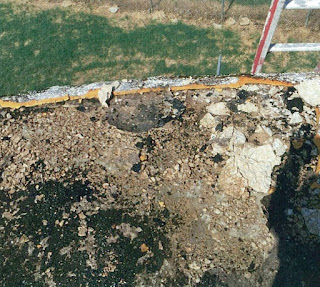 West side of roof. 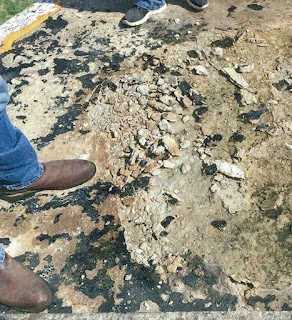 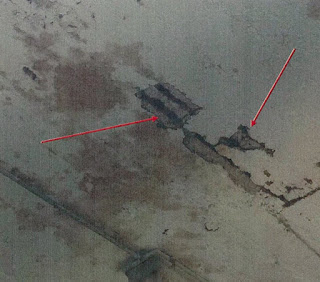 This will be the third report on the old shelter, for a total cost of over $3,000.

City Manager Clayton Lucas reported to the commissioners that rehabilitation on the old shelter had to cease because the roof crumbles. City commissioners previously approved trying to rehab the old shelter when it became apparent that the city does not have the money to build a proposed shelter on property the city purchased for a new shelter on Eppler Avenue. Bids for a new shelter came in higher than expected.

Lucas said he asked for another report because the first report was too vague.

The first structural evaluation was done by Hawkins Weir of Van Buren, Ark., and was submitted to the city on Jan. 9, at a cost of $1,490. That evaluation reported on the crumbling concrete in the roof on the building. It read, "Unfortunately, once these problems progress to the condition they are presently in, they are difficult if not impossible to rehabilitate. Taken into consideration the age of the existing concrete roof slab (approximately 80 years), it is our recommendation that the existing Animal Shelter be abandoned, and the structure demolished after it is vacated. The only way to salvage the structure is to completely remove and replace the concrete roof slab and in our opinion this cost would equal or exceed the cost to construct a new Animal Shelter in a different location."

When city employees began working on the old shelter, they had to wear hard hats to avoid the falling concrete.

Lucas then asked for a structural integrity report on the roof from GTS Inc. of Fayetteville, Ark. That report, at a cost of $1,000, was done on Aug. 6.

GTS reported, "The overall condition of the concrete for the roof structure was observed to be in poor condition. Several types of concrete failures were observed including spalling, cracking, and exposure/erosion of the reinforcing bars. The roof was observed to be 'sagging' in the middle and holding up to 2 inches of water in some areas."

The report concludes, "It is our opinion that this building is in structurally poor condition. If the building is planned to be used in the future, we recommend that a structural engineer be contacted to design repairs and additional supports for the structure and roof systems."

City commissions approved getting another engineering report, at a cost of at least, $1,000.

Lucas said, "I want them to tell us three things. What is wrong with the building? Can it be fixed? And how much will it cost?"

In the meantime, Lucas told commissioners, he has contacted builders who said they can build a simple pole barn structure, 40 feet by 60 feet, for $17,000, and a red iron building, also for $17,000. That amount is considerably less than the original new shelter plan. Lucas said building the necessary concrete pad, kennels and other necessities could be done by the city.

He said he expects the engineering report by the end of this week or next.

The commissioners asked if there was enough land at the old shelter site, which is said to be in the flood plain, to build a 40 by 60 building, and city staff said there was.