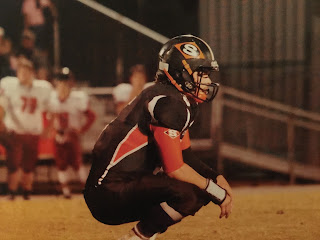 There's some buzz coming out of the Sallisaw Black Diamond football program right now and a lot of it is centered around senior quarterback Quint Scoufus.

Scoufus is a returning starter for the program, last year having played both offense and defense. He led the team in total yards last year with over 2,100 all-purpose yards. Along with that he also managed to find his way into the end zone, both rushing and passing, 29 times.

The 6'4" Scoufus is known around the area (by both opposing coaches and fans alike) as a dual-threat quarterback that can burn you with his passing, and also punish defenders that try to tackle him in the open field. However, you might be surprised to hear that the college interest he is attracting is more for his overall athletic ability and less for his skills as a high school quarterback. Quint is being recruited by many top schools for his size and knowledge of the game. At a recent University of Oklahoma football camp he was invited to, he excelled on the defensive side of the ball, playing both linebacker and defensive end. He added that they are very interested and stated, "I blew up at OU yesterday at a camp, and now they really want me!"

The high school standout has been named to several prestigious lists lately, including being named the number eight quarterback in the state by OK Gridiron, and being named to the Vype top 100 of all high school football recruits in the state. Along with Oklahoma, Quint has had Oklahoma State, Sam Houston State, Brigham Young University, Northeastern Oklahoma, Arkansas, and the University of California at Los Angeles contact him.  His summer schedule this year is revolving around team camps he has received invitations to including Houston, OSU, Arkansas and OU.

Scoufus said that at this time last year he "didn't have anything going," but that this last winter and spring have been huge to his recruitment. He said, "A lot of teams are coming in to talk, and some teams are becoming really interested." That is huge news for the Black Diamond star.

However, the most impressive trait of the football player was that he couldn't stay away from talking about his teammates. He said the team's strong suit this year is that they are going to play together as a team for four quarters in every game.  He mentioned this year's Black Diamond team has a lot of returning talent, and will be getting some good guys back that didn't receive much time last year, due to injuries and other factors.

The quarterback said he won't be solely playing quarterback this year, but that he will be spending some time at tight end and wide receiver, running routes for another Sallisaw senior, J.R. Williams. With that added to Sallisaw's arsenal of offensive talent, and their swarming defense, the Black Diamonds could make a push to a district championship, or even farther under a great coaching staff, and the leadership of their star, Quint Scoufus.