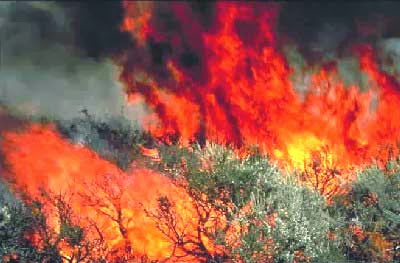 Two wildfires burned over sixty acres in the Gans area Tuesday, but no structures were endangered.

Cliff Eppler, Oklahoma Forestry Ranger Crew Chief, said a wildfire near Gans burned over forty-five acres.  Its source was considered to be intentionally set, but no investigations will be done.  Fire- fighters from the Gans, Muldrow and Redland Fire Departments and from the Forestry Division worked to contain that fire from the time it was reported, about 3 p.m., till 7 p.m.  Three Forestry employees bulldozed a line around the fire to keep it from spreading, Eppler said.

A second fire south of State Hwy 141, west of Gans, burned about fifteen acres.  It was fought by Forestry personnel and firefighters from the Brent, Redland and Gans Fire Departments.  Eppler said they fought the fire from 7:35 p.m. till 9 p.m.  That fire escaped from a waste fire.

According to Eppler, those who burn trash in burn barrels are reminded that the barrel must be cover- ed by a screen or other device to keep wind from spreading hot embers.  About ten feet around the barrel should also be cleared to the dirt to minimize the chance of wildfire.

Oklahoma Forestry is discouraging outdoor burning because of the windy conditions.

For more stories visit us at www.kxmx.com
Posted by News Team at 7:46 AM