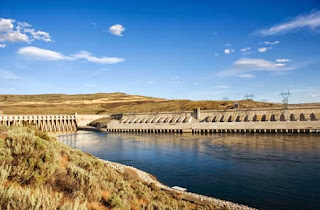 The US House of Representatives passed Water Resources Reform and Development Act of 2013 with overwhelming bipartisan support this past week by a vote of 417-3.  WRDDA brings extraordinary reform through cutting the red tape of federal regulation and clearing the path for increased efficiency and competition in our nation's water infrastructure system.

Congressman Markwayne Mullin said in a release late last week that people often believe water infra- structure doesn't directly impact them if they do not live near a port or a waterway.  But on the contra- ry, many of the products Oklahomans rely on each day are transported by ports and waterways.  Such products include food, clothing and appliances.  Without an up-to-date water infrastructure sys- tem, these products no longer move efficiently and sometimes not at all.

Oklahoma's water infrastructure alone plays a critical role in global competition.  With the McClellan- Kerr Arkansas River Navigation System (MKARNS) Oklahoma is connected to the rest of the nation and the world, while having a $2 million daily impact on Oklahoma's economy.

WRRDA not only means an empowered economy with less federal regulation, but it also means jobs for Americans.  As a member of Congress who is actually creating jobs in the private sector, this is huge.  Thirteen million jobs depend on water infrastructure.  WRRDA is pro-business legislation that will partner with the private sector and result in greater efficiency and accountability.

For more stories visit us at www.kxmx.com
Posted by News Team at 10:12 AM