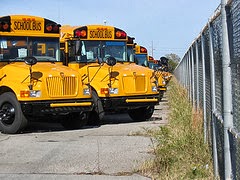 Wednesday more than one hundred students were out of school in Roland due to high fever and vomiting.  The school's cafeteria was inspected by the Oklahoma State Department of Health, according to Leslea Bennett-Webb with the department.  Everything was inspected and the depart- ment has ruled out any food-borne illness.

Bennett-Webb said only nine students had symptoms Tuesday, but as of Wednesday that number escalated to more than one hundred students and thirteen adults.

It is likely a virus that spreads from person to person, according to the Health Department.  Parent Tara Keach said she thinks maybe it's a virus.  Her son has a runny nose and upset stomach.

The Health Department stated that the school contacted them for the inspection.

This would be where we would write the update to the story is there was anything else to report or if there were any new developments.

For more stories visit us at www.kxmx.com
Posted by News Team at 2:01 PM