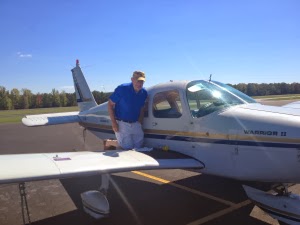 Ray Broadbent of Heber Springs has been found at the site where the plane he was piloting cra- shed.  A signal believed to be from the transponder of the plane was picked up Thursday by rescue crews in Leflore County.  The team received a strong signal near the border of Pushmataha County where the plane was found three miles off Indian Hwy in K Trails rugged terrain, according  to Leflore County Sheriff Rob Seale.  He said the wings were off and debris was scattered pretty far, with one piece in a nearby tree.  Most of the plane's body lay on the ground in the woods.

Leflore County deputies, Civil Air Patrol, Okla. Hwy Patrol and volunteers from local fire departments assisted in the search in the air and on the ground.

Dardee Broadbent, the pilot's wife, reported to the FAA Tuesday that her husband was missing.  She had been unable to contact him.

Broadbent took off Monday around 1:30 p.m. from Scearcy heading to Elk City, OK.  He had not checked into his Elk City hotel.  The last known radio contact with the pilot was at 8:03 p.m. Monday, Sheriff Seale said.  According to FAA record, Broadbent was traveling at approximately 105 mph when contact was lost.  The aircraft was a single-engine Piper and is reliable and has never had any problems, Dardee said.

Broadbent was 19 when he received his pilot's license.  He flew commercial planes for Pan-Am and owns three planes in Sceary.


For more stories visit us at www.kxmx.com
Posted by News Team at 12:29 PM