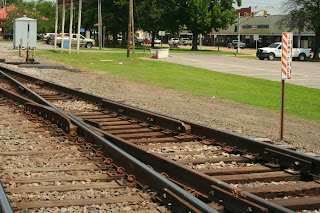 Michael Crabtree, 20 of Sallisaw, was killed Saturday evening when he was struck by a train as he was attempting to cross the tracks near the intersection of Cherokee & Wheeler.  There was a carni- val going on nearby.

According to eyewitness Tawaun Smith, the rails were going down as the train approached.  She then saw Crabtree walking by the barricade and the train blew its horn.  He just leaped in front of the train.  Smith said she guessed he must have thought he could make it.

Police Captain Bo Gabbert of the Sallisaw Police Department said that the Police Department and Union Pacific Railroad authorities are investigating to determine what happened in the moments be- fore Crabtree darted in front of the train.

The driver of the train has not been issued a ticket and is not expected to be cited in the accident, according to the authorities.

For more stories visit us at www.kxmx.com
Posted by News Team at 9:40 AM