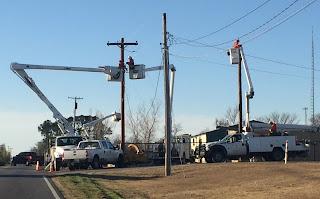 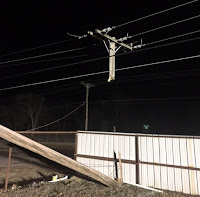 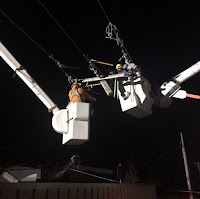 A flying roof, off a portion of the county barn on County Highway 17 on Sallisaw‘s north side, hit three power poles and broke two off at the ground, disrupting power to homes and the Sallisaw Water Treatment Plant early Wednesday.

Sallisaw City Manager Clayton Lucas said the city’s electric crews were busy all night working on replacing power poles and reattaching power lines, and had the power restored by mid-morning. He said about 60 customers were without power.

Lucas said the water treatment plant crew also had to report to work early to reset equipment at the plant. A generator kicked on at the plant and kept it running, he added.

Sequoyah County Commissioner Jim Rogers, District 3, said only a portion of the roof was swept away in the early morning storm, and the building is insured. He expected repairs to be made quickly. No other damage was reported at his county barn.

Lucas said no other damage was reported in the city as of 9 a.m. Wednesday.

Rogers said he had reports of a few trees down.

“We’ve been out driving the roads,” he said, “and haven’t seen other damage.”

He said it was reported that a shed on Dwight Mission Road, west of Sallisaw, may have lost a roof during the storm.