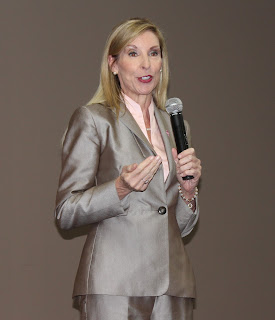 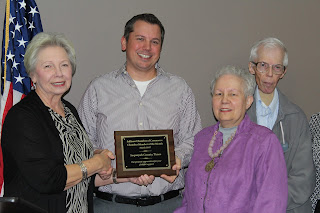 Sallisaw Chamber of Commerce President Cheryl Mills, left, presents the Chamber
Member of the Month Award to the owners of the Sequoyah County Times,
from Mills’ left, Jeff Mayo and Becky and Jim Mayo. 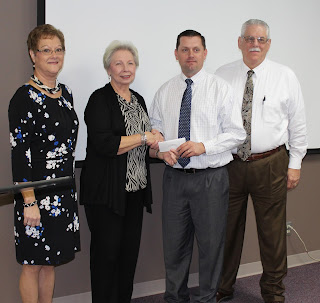 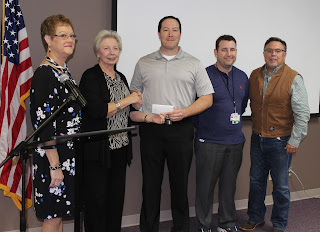 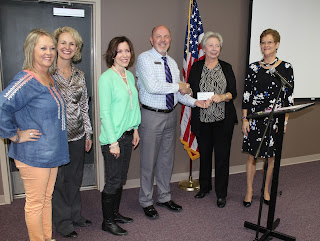 Knoke said 700 persons, both men and women, have mammograms at the hospital a year, and the regional occurrence of breast cancer is three times the national average.

She said, “It is important that, as your hospital, we offer the services you need.

“The hospital does belong to you,” she said.

Knoke introduced Pam Ballard, Komen Foundation CEO. Ballard asked the crowd not to be shy about using the words breast and cancer in mixed company.

“Speaking about this is something we should do in public,” she said.

Ballard said early detection is the key to surviving breast cancer. If breast cancer is detected early, patients have a 99 percent cure rate.

Ballard said the reasons Sequoyah Memorial Hospital received the grant was because of the dedication of the staff, which has over 80 years of experience, the high rate of breast cancer in the region, and the easy accessibility of the hospital’s services.

Ballard urged the community to help the hospital, through donations, to reach the $300,000 needed for the digital mammography project.

Mills asked chamber members to volunteer for and help sponsor the Diamond Daze Festival, to be held June 1, 2 and 3 on the Sallisaw High School campus. The festival features the Battle of the Bands on June 1, and country singers Craig Morgan on June 2 and Phil Vassar on June 3.

The chamber will sponsor a workshop on Small Towns at 11:30 a.m. March 29 at the People Inc. Conference Center. Deb Brown from SaveYourTown will be the guest speaker. Those planning to attend are asked to respond by March 27 by contacting the chamber or calling 918-775-2558. Lunch will be served.

The Sequoyah County Times was named the chamber’s Member of the Month for March. Jim and Becky Mayo, Jeff and Beth Mayo and the Times’ staff accepted the award.

Mills noted the Times was founded by Florence and Wheeler Mayo, and has been in business for 84 years. The owners and operators of the newspaper are Jim and Becky Mayo and sons, Jeff and Jack Mayo.