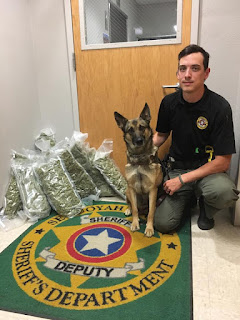 Deputy Steven Jenkins and his K9 Officer Joi are with 13 pounds of suspected
marijuana confiscated during a traffic stop on Interstate 40 March 8.

Deputy Steven Jenkins and his K9 Officer Joi along with Deputy Thomas Stafford arrested two men from Searcy, Ark., at about 4 p.m. March 8 after stopping the driver for speeding and failure to use a turn signal when changing lanes. The stop was at the 297 mile marker between Sallisaw and Vian.

The officers uncovered about 13 pounds of suspected marijuana in the men’s white rental car, Jenkins reported.

Darion Hastings, 22, and Marques Mosley, 22, were booked into the Sequoyah County Jail for possession of a controlled dangerous substance with intent to distribute and possession of paraphernalia.

On the same day, March 8, Stafford stopped a vehicle north of Vian on State Highway 82 for an obstructed car tag, covered in mud, and for crossing the center line.

Arrested in that stop were Janenne Monae Johnston, 49, of Sallisaw and Tommy Sam Gilbreath, 51, and Samuel Jason Nutt, 49, both of Vian.

They were booked into the county jail for possession of a controlled dangerous substance. The substance, a white crystal powder, was sent to the Oklahoma State Bureau of Investigation lab in Tahlequah for identification.

Lane, in a statement, praised the officers. “I want to say thanks and congratulate Deputy Steven Jenkins and K9 officer Joi, as well as Deputy Thomas Stafford, for their continued hard work and relentless pursuit of criminal and narcotic violations. Also thanks to Undersheriff Greg Cox and OHP Trooper Cody Hyde for their assistance on the case."