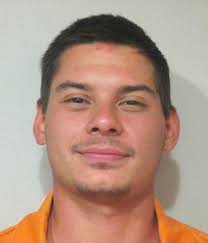 A Vian man reached a plea agreement in his second-degree murder case in Sequoyah County District Court, Sallisaw, and was sentenced Thursday to 20 years, with 10 years suspended for an amended charge of manslaughter.

Michael Dean Buster II, 24, is accused of the Sept. 29 beating death of Pliney Dane Crum, 31, at Crum’s home north of Vian. Buster initially pleaded not guilty to the charge.

According to investigators’ reports, Buster was found at Crum’s home, and admitted to killing Crum in a fist fight. He said the two had been drinking and Crum was calling him a name. Buster told investigators he blacked out and when he came to he was sitting on top of Crum hitting him in the head. He said he then went across the road to McQuick’s convenience store and asked that 911 be called because “he just killed someone.” That statement led witnesses to the unconscious Crum. Buster was arrested at the scene.

Crum died the next day at a Tulsa hospital.

Thorp explained, “He (Buster) pleaded guilty to an amended charge of manslaughter and was sentenced to 20 years. He will spend 10 years in prison with 10 years suspended.”

Thorp added that the sentence includes sentencing to run concurrently for two other cases in which Buster was charged.

On May 2, 2012, he was charged with endeavoring to manufacture a controlled dangerous substance and no valid driver’s license.

His plea includes those two cases and the sentences are to run concurrently with the manslaughter sentence, Thorp said.

Major was arrested Oct. 1, 2015. According to the investigators, Major at first denied being at the scene, although he did admit he took Buster to Crum’s home, but said he left before the fight. Surveillance tape from McQuick’s store, obtained by the investigators, shows Major leaving Crum’s home just 10 minutes before Buster runs across the street to ask for help. Major eventually told investigators he was at the residence during the fight and related how the fight occurred. He said he told Buster to run for help and that he tried to revive Crum. According to the report, Major said Buster was “freaking out,” and he was afraid Buster would attack him, so he left.