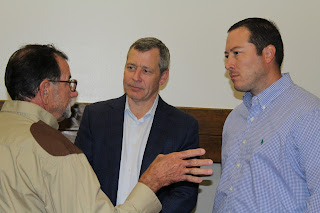 Garrett spoke to a standing-room-only crowd about the economic impact of the Cherokee Nation in Sequoyah County, the tribe’s 14-county area in Eastern Oklahoma and the state. According to information supplied by Garrett, Cherokee operations in Sequoyah County generates more than $117 million in local production, while supporting 1,039 jobs, including 300 new jobs at the new Cherokee Casino and Hotel in Roland, and $37.4 million in local labor income.

Garrett said CNB has two primary objectives – making the maximum annual dividend for the Cherokee government and to generate jobs. This year’s gross revenue is $930 million, he said. CNB has over 6,000 employees and a diverse portfolio of businesses. He pointed out that not all CNB revenue comes from gaming. Over one-third of CNB revenue is not related to gaming.

In the areas of education and job training, Garrett said over 4,000 students have received scholarships or financial support from the tribe in the last year, totaling over $7.4 million. In addition, the tribe’s Culinary Training Services is located in Sallisaw and a job placement office is at 100 E. Choctaw.

Garrett said the tribe has spent over $100 million for health and health care and $10 million at the Redbird Smith Health Center in Sallisaw.

In addition, Garrett said, the tribe financially supports the maintenance of local roads and bridges, and donated $450,000 to fire departments this year.

“These are the things that keep us safe and our communities sound,” Garrett said.

Garrett said at the present time the tribe is building 24 new houses in Roland and 10 new homes are on the drawing board for Vian.

About the tribe’s ownership and plans for Blue Ribbon Downs, Garrett said, “We’ve got people studying it and thinking about it.”

He said the tribe is operating the training track and has resumed time trials for horses in training. But, he added, “There is no easy answer.” He said the track’s future depends on “If we can create jobs that fit within our mission.”

Garrett concluded that the Cherokee Nation had a $1.5 billion impact on the state’s economy.

He said, “We’re here to stay and make these communities the best they can be for everyone.”