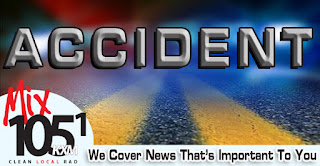 Sallisaw man was charged with DUI after rolling his Nissan pickup into a creek Nov. 28, police records show.
Jake Edward Taff, 27, faces up to 10 years in prison along with a fine of up to $1,000 on the felony charge.
At 11:10 p.m. Nov. 28, an Oklahoma Highway Patrol trooper was notified of an accident with injury on County Road S. 4690 just south of State Highway 101.
While traveling to the crash site, dispatch notified the trooper that the driver involved in the crash had been found at a residence about a mile away from the scene of the collision. The sheriff’s deputy at the scene told the trooper the driver, identified as Taff, was intoxicated and asking to be taken to Hastings Hospital in Tahlequah, but that his family had canceled the call to Pafford EMS.
Taff had initially told a deputy he had been driving a truck and that he had not had anything to drink.
The trooper learned that Taff had gone to the VFW Hall, where he had been cut off from alcohol and told to find a ride home. He instead allegedly drove off in an attempt to make the trip on his own. His black Nissan Titan pickup was later found down in a creek bed of water and had been rolled at least one time.
While members of law enforcement were outside the home, emergency medical personnel arrived again, prompting the trooper to question Taff himself.
As soon as he entered the home, the trooper noticed a change in Taff. When asked if he could tell the trooper what had happened, Taff responded by telling the trooper, “I don’t know what you’re talking about.” When he was asked if he was driving the truck, Taff said, “What truck?” During the conversation, the trooper noticed Taff’s obvious slurred speech and changed demeanor.
Giving up on getting answers, the trooper gave EMS the go-ahead to transport Taff to Hastings Hospital.
Laura Brown, KXMX Staff Writer
For more news stories stay tuned to The MIX 105.1 or visit www.kxmx.com