Siblings Safe After Missing for 11 Hours 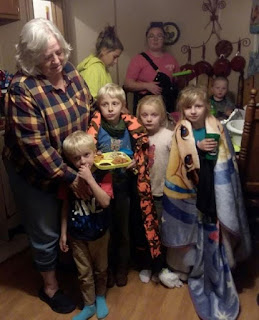 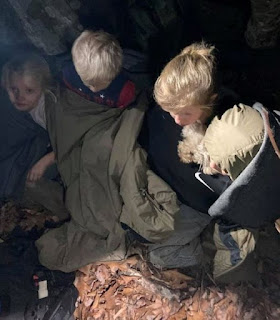 The children immediately after being rescued
after 11 cold hours lost in the woods.
‘Yes, It’s Us! We Want to Go Home!’
With those words, four Vian children were rescued after being missing for 11 hours. They were found under Tenkiller Dam after 2 a.m. Wednesday, cold and suffering from scrapes and bruises, but otherwise doing well.
“I’ve never been so happy than when they found them,” the children’s great-grandmother, Freda Jolly, said Wednesday. “I just kept praying, ‘I want my babies. I want my babies.’ ”
Jolly has custody of the blonde-haired, blue-eyed children, who include 9-year-old Nathanial, 7-year-old Maria, 6-year-old Adabell and 5-year-old Levi.
Jolly said the children were outside playing at her home just off Moonshine Road north of Vian on Tuesday afternoon when she went inside the house to answer the telephone. Her granddaughter was on the line, asking if she could come over. Once plans were made, Jolly went outside to tell the kids the girl was coming over to play but they were nowhere in sight.
Members of several law enforcement agencies assisted in the search, including the Sequoyah County Sheriff’s Office, the Oklahoma Highway Patrol and local police departments, along with local fire departments and volunteers. Search-and-rescue helicopters were also dispatched from Tulsa to help search for the children, along with drones with heat-seeking capabilities.
“It amazed me how many people reached out to us and offered to help, to pray. I’m just so grateful,” Jolly said.
Jolly said her oldest great-grandson, Nathanial, was the one who kept the four together during their adventure, which began when they fell down a ravine and couldn’t climb back out of it, she said.
Nathanial, remembering a lesson his great-grandfather had taught him, pulled out the flashlight he was carrying and guided the group to higher ground. With his younger siblings asleep, Nathanial waited. When he heard a woman on horseback calling his name, he climbed on top of a large rock and began waving the light and yelling until they were rescued.
“I’m just glad he listened to Grandpa. Grandpa always carries a flashlight,” Jolly said.