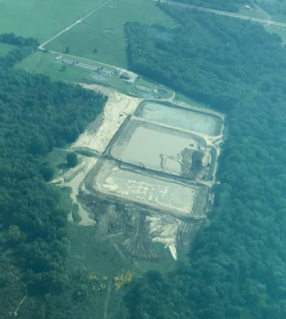 A recent aerial photograph of the Sallisaw Wastewater Treatment Facility
shows the ongoing expansion of the emergency flow basin.
Improvements to the City of Sallisaw Wastewater Treatment Plant are continuing with the award of a contract for Phase II of the Emergency Flow Basin Expansion Project. At the September 2, 2020 meeting of the Salllisaw Municipal Authority Board of Trustees, a contract for the project was awarded to HCCCo, LLC of Tulsa, OK, in the amount of $875,490.
This project will complete the expansion of the emergency flow basin, providing additional storage capacity during heavy rain events. This expansion was required by the Oklahoma Department of Environmental Quality in 2013.
When completed, over $1.6 million will have been invested into the flow basin expansion project. Funding for the project included the city budget and a $450,000 grant from the Oklahoma Department of Commerce CDBG funding. The expansion of the flow basin is just one of several projects planned for the aging wastewater plant over the next 6 to 12 months.
A new bar screen, which removes solids from the sewage flow before it enters the plant, and rehabilitation of an existing aeration basin are also planned. In addition, a new method of treating the outflow of the plant, replacing the current use of Chlorine and Sulfur Dioxide, is currently under evaluation. Estimated costs for these projects are approximately $1 million.
The Sallisaw Wastewater Treatment Plant was originally built in 1970, with upgrades in 1991. Operating 24 hours per day, the plant is capable of treating up to 3.25 million gallons of wastewater daily.