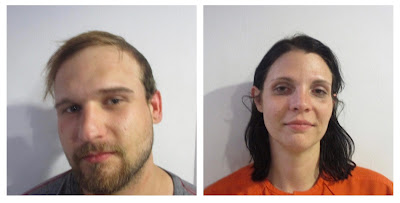 James Paul Cripps, 22, of Sallisaw and Chancey Tanielle Yandell, 29, were driving through town when a Sallisaw detective received information from the Sequoyah County Sheriff’s Office that Yandell had a confirmed federal arrest warrant. He was also told that Yandell had been seen with Cripps recently, so officers ran surveillance at Cripps’ Sallisaw apartment complex.

At 10:24 a.m., officers were traveling south on Walnut and preparing to stop at the stop sign on Choctaw. The officers then saw a female, believed to be Yandell, sitting in the front passenger’s seat of a silver Ford Ranger pickup as it turned north onto Walnut from Choctaw.

As police moved in, the two traveled down Cherokee at a high rate of speed. While trying to catch up to the vehicle, the driver made an abrupt turn into the convenience store at Maple and Cherokee. They then cut through the parking lot to avoid the red light and backed up traffic. As they got closer, law enforcement could see the Ranger traveling at about 50 mph in a 25-mph zone.

The police then turned north onto Maple Street and saw the Ranger travel east onto Denton Street. As police approached Denton Street, the suspect vehicle was very close to the end of Denton and traveling at a very high rate of speed.

As police traveled down Redwood and approached Walnut they saw Cripps and Yandell approaching Redwood. The officers quickly pulled up and stopped, trying to keep the pair from traveling forward. Cripps then backed up the truck and drove around, nearly striking a patrol car.

The duo then traveled east on Redwood at speeds in excess of 70 mph in a 25-mph zone. With law enforcement in pursuit, the truck ran off the road and spun out near Clif’s Pharmacy. Because of his erratic driving, Cripps reportedly could not keep the vehicle straight.

The truck then made it to Rigsby Drive and traveled east. A police lieutenant was able to get behind the vehicle with his emergency lights and siren on. Cripps then traveled east on Rigsby and rammed through two wooden fences and then traveled south toward the north side of Sequoyah Manor Nursing Home.

The police continued their pursuit until they discovered the truck, which was wrecked in the ditch that runs parallel to Redwood Street and the suspects ran east from the scene.

Police then traveled to the southeast between two houses near Sam Ed Bush Drive and Byrd Street, where they eventually were able to apprehend Yandell and Cripps.

Back at the wrecked truck, officers discovered that the 2020 Ford Ranger pickup had been entered into the National Crime Information Center (NCIC) as stolen since Sept. 9, out of Fort Smith, Ark.

During an inventory of the truck, officers discovered a Savage Arms Corp. Stevens Model 940A, sawed-off shotgun in the back floorboard of the truck. The barrel was about 12½ inches long and its serial number had been filed off.