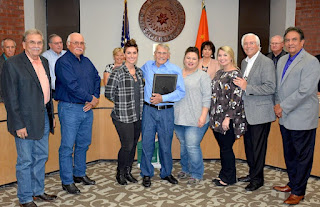 John Levi Swimmer, 83, of Vian was one of three military veterans recently honored by the Cherokee Nation.

Staff Sgt. Swimmer was born Jan. 4, 1934, in Vian where he graduated from high school in 1953 and was soon after drafted into the U.S. Army.

Swimmer was chosen to participate in the General Mark Clark Leadership School and later served his first deployment at Camp Casey in Korea. After receiving an honorable discharge in 1955, Swimmer worked for ARK/LA Natural Gas Co. in Arkansas and later returned to Oklahoma to work for Kerr McGee.

From 1970 to 1980 Swimmer served on the Vian School Board where he played a large role in the construction of several of the schools’ buildings. Swimmer still lives in Vian.

Swimmer said, “I thank the people here. I’m proud to serve my country. I lived my life with the things that guided me – my family, my country and my duty.”

Each month the Cherokee Nation recognizes Cherokee service men and women for their sacrifices and as a way to demonstrate the high regard in which all veterans are held by the tribe. Native Americans, including Cherokees, are thought to have more citizens serving per capita than any other ethnic group, according to the U.S. Department of Defense.