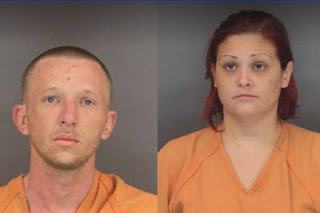 A couple with reported ties to the Sallisaw area who were wanted for assaulting and robbing a 70-year-old Fort Smith man were arrested on Thursday. Dale Roberts, 29, and Nicole Standige, 30, were located and arrested in Bloomsburg, Pennsylvania.

John Thomas, a 70-year-old disabled Vietnam Veteran, reported to authorities that he was approached by the couple after he pulled into his driveway on Tuesday, April 11. Thomas stated that he knew Standige through his son and thought he could trust them to help him with his groceries. However, once inside the home Roberts and Standige allegedly hit the man several times with a blunt object leaving him with a large cut and several fractures on one of his forearms. The elderly victim was then tied up with an electrical cord.

The two then are said to have taken the man's cash, debit card, cell phone and other items before driving away in the victim's silver 2011 Kia Soul with Arkansas license plate EMAFZP.

After freeing himself from the cord the victim was able to go outside where he was helped by a bystander who contacted the police.

Roberts and Standige were wanted on charges of Aggravated Robbery, Battery in the 2nd Degree and Felony Theft of Property.