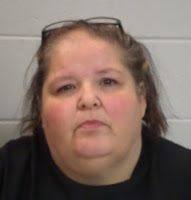 On March 31 the Sallisaw Police Dept. was contacted by a local loan company in regard to an employee's alleged criminal activity. According to the report the employee was believed to be creating fraudulent loans.

The employee, Rhonda Irwin, was arrested on April 5th as a result of the investigation by the Sallisaw Police Dept. according to Sallisaw Chief of Police Terry Franklin. Irwin was charged with 17 counts of second degree forgery and 6 counts of exploitation of the elderly or disabled adults.

During the time of the fraudulent activity Irwin was employed as the manager of the loan company. Franklin stated that the investigation revealed that Erwin was taking loans out in current customers names without the authorization of the customers. The fraudulent loans reportedly add up to thousands of dollars.

"Irwin was booked into the Sequoyah County Jail and later released on bond," added Franklin.