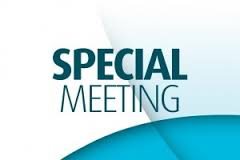 A special city council meeting will be held Thursday, April 13 at 6 p.m. to discuss and possibly take action to determine who will serve as the next mayor of Sallisaw.

Current mayor, Julie Ferguson, chose to not run for re-election for the position. George Bormann won the election for mayor against city councilman Jim Hudgens but was unable to accept the position due to the terms of his employment with the Oklahoma Corporation Commission. This left a vacancy for the position and questions regarding how the next mayor would be chosen.

City Attorney John Robert Montgomery presented a memorandum to the city manager, mayor and council members advising that "Julie Ferguson, the current elective Mayor, continues in her office on and after April 17, 2017, and until her successor is duly qualified; and that her appointed successor becomes qualified by taking the oath and entering into a good and sufficient bond in the sum of $5,0000.

It was also determined that the new mayor would be appointed by the current city council. That appointment could possibly be made at Thursday's meeting. According to City Manager Clayton Lucus it will be up to the council to decide if they are prepared to nominate, vote and appoint an individual to the position of mayor.

"The council is inviting anyone interested in being appointed to the position to come to the meeting and speak and explain why they would like to be appointed," stated Lucas.

If an appointment is made at the meeting the new mayor will not be eligible to take office until he/she has been sworn in and bonded.